The Office for National Statistics (ONS) have released provisional counts of the number of deaths registered in England and Wales in the week ending 26 March 2021.

“Provisional counts for COVID-mention deaths by date of occurrence are key data.

“Wave 1 peak count was 8343 COVID-mention deaths and it took 15 weeks until the Wave 1 weekly count dropped below 1/50th of Wave 1’s peak-count (ie below 167). Wave 2 is likely to achieve the corresponding goal in fewer than 15 weeks.

“In England and Wales, not all deaths which occurred in the week ending 26 March 2021 have yet been registered. Taking registration delay into account, we can expect that 500 to 530 COVID-mention deaths may have occurred in England & Wales in the week ended 26 March 2021, see Table.  Fortnightly rates have long since switched from increasing to decreasing (most recent yellow; most recent turquoise).

Half of the 80+ year olds who received their 1st mRNA dose prior to 4 January received their 2nd before 25th January (mostly in the week of 4-10 January). Hence, the full impact of 2-dose vaccination – on COVID-mention deaths – could hardly be expected until three or four weeks later and so in the week ended 5 February at the earliest.

Crude monitoring of all COVID-mention deaths, without taking cognizance of the vaccine roll-out by vaccine-type and whether 2nd dose was administered, is insufficiently incisive as a commentary on the effectiveness of vaccine because roll-out was concurrent with lock-down which, by itself, has a major impact. 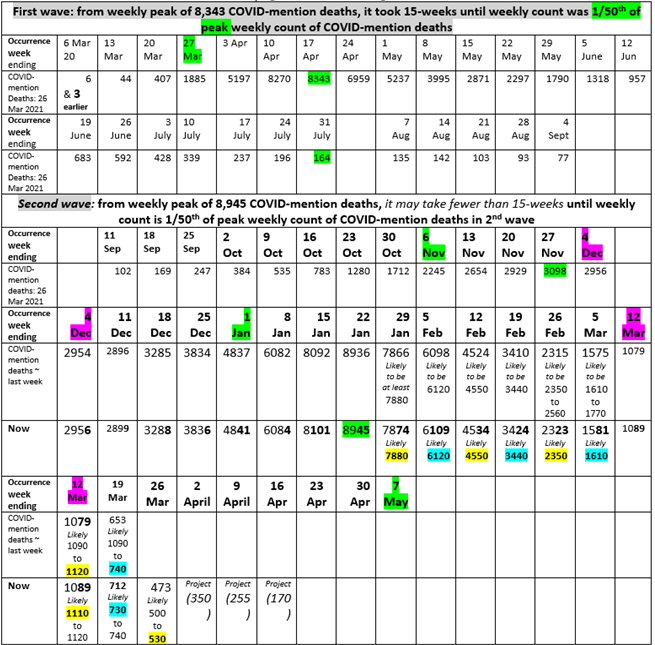 “The latest ONS weekly bulletin on death registrations in England and Wales takes the picture up to the week ending 26 March, and it shows almost everything moving in the right direction. For the third week running, deaths registered in England and Wales from all causes are below the average of the five years 2015-2019, so (on that measure) there are no excess deaths. The total number of deaths from all causes is lower than the previous week, though deaths generally do fall between those two weeks as we move into Spring. Deaths that have Covid-19 mentioned on the death certificate fell by a quarter compared to the previous week, to 719. Of those, 535 had Covid-19 recorded as the underlying cause of death, and that’s 28% down on the week before. The largest falls in deaths involving Covid-19 were again in the older age groups, where more people will have been protected by vaccines from the most serious consequences of infection – but deaths involving Covid-19 in people under 50 were considerably down anyway, by 21% compared to the previous week. But there are still reasons why we need to be vigilant and careful, as I’ll explain. Moving in the right direction doesn’t mean that we’ve already got to the right place.

“Really the only small signs of anything moving the other way are that total deaths from all causes in Wales and in the English East Midlands were slightly higher in the week ending 26 March than the previous week, by 4% and 5% respectively. The numbers or all-cause deaths were down in all the other English regions.  But these numbers do vary for a large number of reasons, and these few exceptions to the general direction don’t particularly worry me. Deaths in Wales that week were still below the five-year average, and have been so for four weeks now. Deaths in all but two of the English regions were also below the five-year average for the week ending 26 March. The exceptions were the East Midlands and West Midlands, where deaths were 2% and 1% above the five-year average respectively. Deaths involving Covid-19 were down in every English region and in Wales that week, compared to the week before. Registered deaths involving Covid-19 were down in Wales and in every English region that week, and numbers in some places are really getting low (32 in Wales that week, 34 in the South West, 35 in the North East). If I have any concern about these regional figures, it is for the East Midlands, where total deaths were above the five-year average (if only by 2%) and rose by 5% compared to the previous week, and where deaths involving Covid-19 fell by only 3% compared to the week before, when the average fall across England and Wales was 25%. We’ll have to see what happens in coming weeks – though this is one of those times of year when death registration figures become harder to interpret because of late registrations at Bank Holiday times.

“I’m not getting complacent, though. There were still 719 registered deaths involving Covid-19 in England and Wales the week ending 26 March. That’s around the level from mid-October last year, and seven times as high as the weekly level in mid to late August. And the protection of older people by the vaccine means that a greater proportion of Covid-related deaths are in younger people. In the latest week, ending 26 March, 98 of the 719 registered deaths were of people aged under 60, that’s 14% of all the Covid-related deaths. In the week ending 23 October last year, there were many more registered deaths involving Covid-19, 978 of them in all, but only 55 of those were in people under 60. That’s not much more than half the level for the most recent week, and only 6% of the Covid-related deaths that week. Back last August and early September, the registrations of Covid-related deaths in people under 60 were running at about 10 a week. Now we’ve got 10 times as many as that. Younger people will be protected by the vaccine as the roll-out continues, but there are still important reasons for continuing to be careful with social distancing, masks, and so on.”

This website uses cookies to improve your experience while you navigate through the website. Out of these, the cookies that are categorized as necessary are stored on your browser as they are essential for the working of basic functionalities of the website. We also use third-party cookies that help us analyze and understand how you use this website. These cookies will be stored in your browser only with your consent. You also have the option to opt-out of these cookies. But opting out of some of these cookies may affect your browsing experience.
Necessary Always Enabled

Any cookies that may not be particularly necessary for the website to function and is used specifically to collect user personal data via analytics, ads, other embedded contents are termed as non-necessary cookies. It is mandatory to procure user consent prior to running these cookies on your website.