The Office for National Statistics (ONS) have released provisional counts of the number of deaths registered in England and Wales in the week ending 1 October 2021.

“In my comments on the weekly ONS bulletins on death registrations and on the Covid-19 Infection Survey, I’ve been pointing out for several weeks that the short-terms trends are different in different parts of the UK, and that that seems to be because the current state of Covid-19 is characterised by outbreaks that arise in different regions or areas at different times.  Well, that’s still the general position, but the latest bulletin giving provisional counts of death registrations does show things moving in the same direction rather more consistently across the country, and generally the direction of travel looks better than it has for many weeks.  So there’s some cause for optimism, I’d say – though we’ve got to bear in mind that things can turn around quite fast, as we’ve seen before several times during the pandemic.

“The latest bulletin takes the data up to the week 25 September to 1 October.  On death registrations where Covid-19 is mentioned on the death certificate, the total number for the UK for that latest week is down by about an eighth compared to the previous week, a fall from 1,110 to 972.  The number of Covid-related death registrations for the whole UK rose week on week, every week from mid-June until the week ending 24 September, so to see a reasonably substantial fall is encouraging even if so far it’s only for one week so far.  What’s more, it fell over that week in every one of the four UK countries taken separately.  The fall was proportionally least in England, where the number went down by about a tenth compared to the previous week.  It was proportionally more in the other countries, particularly in Wales, though the numbers of deaths involving Covid-19 are more variable in the smaller UK countries simply because the numbers of deaths there are smaller.  The falling trend over the most recent week means that the pattern in the death registration figures now begins to look more like the trends in the deaths 28 days after a positive Covid test on the dashboard at coronavirus.data.gov.uk.  Those dashboard figures have been falling for the UK as a whole since roughly the first week in September, and indeed have been falling in all four UK countries, though for differing periods of time in different countries.

“The short-term trends aren’t entirely uniform across the English regions.  Numbers of registrations involving Covid-19 were down in the latest week compared to the week before in five of the nine English regions (North East, North West, East Midlands, West Midlands, East of England), and pretty well unchanged in Yorkshire and the Humber, but they increased in the southern English regions of the South East, South West and London.  The increase in London was particularly marked, with registered deaths involving Covid-19 going up by more than a third from 78 to 107.  However, these short-term differences in trends in regions that are relatively small (compared to the whole country) aren’t worrying, not unless they carry on over a longer period than just one week.

“There are certainly reasons for optimism about the very short-term trends in Covid-related death registrations, but that shouldn’t hide the fact that the numbers are still quite high.  The last time Covid-19 death registrations for the whole UK were at the level of the most recent week was in late March.  And 972 deaths in a week, the latest UK figure, is still almost 140 a day.  I wouldn’t be at all comfortable if the figure remained that high.  It may well continue to fall, at least in the short term, but we are moving towards the winter when respiratory infections, such as Covid-19, usually have greater impact.  So it’s important to get infection levels down.  If someone avoids becoming infected with the virus that can cause Covid-19, they will obviously not die of the disease.  Currently infection levels are high, particularly in children of secondary school age, so it’s really important to get on with vaccinating people in that age group.

“Wave 3 for England & Wales is shown below from mid-June 2021.  Return to English schools on 1 September 2021 is associated with a modest upswing.  However, as mid-term break approaches, it seems that weekly occurrences of COVID-mention deaths have remained below 1,000 per week.  When pupils and universities return, and as autumn turns to winter, caution is again needed.” 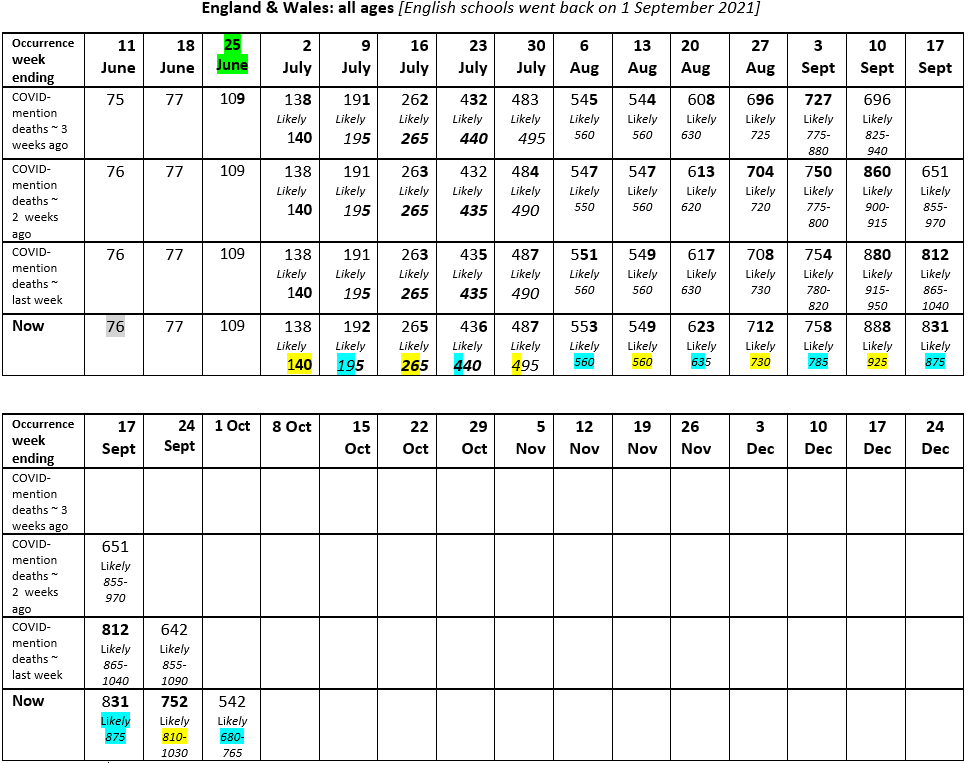