The Office for National Statistics (ONS) have released the latest data from their COVID-19 Infection Survey on antibodies.

“Dis-united background: Previously, I showed that the percentage of citizens in priority groups 1+2 (residents and staff in care home for older adults; all those aged 80+ years and frontline health and social care workers) who received their 1st Pfizer/BioNTech mRNA dose before 4th January and had received their 2nd by 24 January varied massively across the four nations of the UK: over one-third in England, 6% in Scotland, 1% in Wales, 56% for Northern Ireland.

“Now to today’s important results: The prevalence of antibodies to SARS-CoV-2, measured during 5th January to 1 February 2021 for the ONS Infection Survey in England, Wales and Scotland (not shown for Northern Ireland), relate to 80+ year olds living in households – not in residential care.  However, England’s 2nd Pfizer/BioNTech doses may, more readily, have been administered to 80+ year olds who were not in residential care and who constitute 1.49 million of England 2.84 million persons aged 80+ years.

“Only in England do we observe the substantial increase – by 30 percentage points – in antibody prevalence for those aged 80+ years.  Subdivision of ONS Infection Survey respondents by vaccine-type and whether 2nd mRNA vaccine was administered could be insightful – especially as Scotland may have concentrated its initial Pfizer/BioNTech doses for 80+ year olds on those in residential care.” 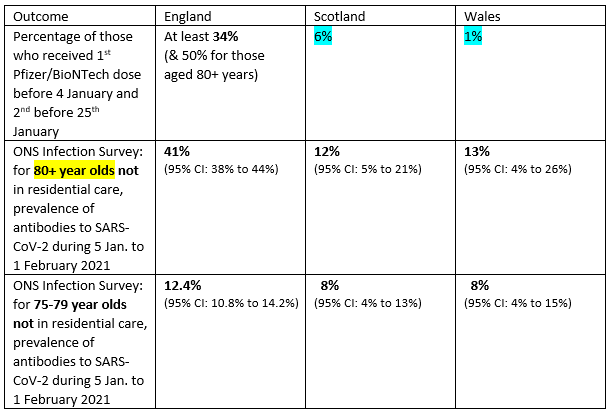 “This is one of a series of excellent, well-researched papers from the Office of National Statistics (ONS).

“People infected with the SARS-CoV-2 virus usually develop antibodies 2-3 weeks after being infected, which can be measured in their blood (and also in other fluids such as oral fluid).  The measurement of antibodies in blood is sometimes referred to in medical circles as “serology”, so surveys like this can be referred to as “serosurveys”.

“One of the big questions has been, and remains, for how long these antibodies can be detected after infection, whether people can be immune without detectable antibodies, and for how long.  This study does not attempt to answer these questions, simply to give a snapshot of the proportion of the population with antibodies.

“This latest ONS report on the prevalence of antibodies reactive SARS-CoV-2 in the UK population makes interesting reading.  It shows a mixed picture across the United Kingdom, with England’s over-80s being the most likely group to have antibodies, presumably largely because of the extensive vaccination programme, but it is not possible to separate antibodies produced in response to vaccination, from those which have been induced by infection.  In England, Scotland and Wales, relatively high number of 16-24 year olds also have these antibodies, but this is presumably due to the higher levels of exposure to the virus, seen in that age group.

“It could be tempting to assume that quantifying antibody levels like this tells us the level and distribution of immunity to Covid-19 in the population, but we do not know what components of the immune system are required for immunity or how long protection will last.  Until we have a much better idea of the correlates of protection, the picture will remain uncertain.”

“Antibody levels to the virus have increased across the UK.  This two weekly survey estimates the number of people who have antibodies against SARS-CoV-2 and shows that these have increased across the whole country.  In England 1 in 5 tested positive for SARS-CoV-2 antibodies against the spike protein with over 40% of the over 80 age group being antibody positive.  This is most likely due to the high vaccination rate in this group.  One problem with this survey is that it does not discriminate between individuals who have antibodies due to past COVID-19 infection versus those whose antibodies are a product of vaccination.  All currently approved COVID-19 vaccines use the spike protein as their immune target.  It would be much more informative if an alternative antibody test was used that was more specific for virus infection such as those that detect antibodies to the SARS-CoV-2 nucleocapsid.”

“In previous ONS releases of data from their infection survey about antibodies, we could interpret them as telling us about the numbers of people who had previously been infected by the virus, because for the great majority of people that was really the only way that antibodies could have arisen in their blood.  (A few could have developed antibodies from being in a vaccine trial, but those numbers were much smaller.)  But the antibodies that arise from an infection are the same as the antibodies arising from a vaccination, as far as these data are concerned.  The latest ONS release covers the period from 5 January to 1 February this year.  Though the numbers of vaccinated people aged 70-74 and 75-79 were increasing rapidly over that period, the average proportion of those age groups that would have been vaccinated was much lower than for people aged 80 and over.

“It must be this vaccination effect that explains the very large proportion on people in England in the 80+ age group that have antibodies to the virus – almost half of them.  NHS data for England indicate that about a quarter of the 80+ age group had been vaccinated at the start of the period 5 January-1 February, rising to about 90% by the end of the period.  Give that it takes a couple of weeks for the vaccine to take effect, so that antibodies would not be detectable immediately, that fits in with the proportion of this age group that had antibodies according to the ONS survey.  Some people in this age group would have antibodies from a previous infection, but most will have got them from vaccination.  In next month’s antibody data, we should see the percentages with antibodies in the slightly younger age groups increasing a lot, and the antibody prevalence will continue to move down the age scale as vaccinations are given to more and more younger people.  Antibody prevalence is already quite high in the youngest age group covered, 16-24, in England and in Wales (though not so high in Scotland and Northern Ireland), and most of those younger people would have antibodies because of an infection rather than vaccination.

“That does raise the question of why the proportion with antibodies in this oldest 80+ age group isn’t so high in the other three UK countries as it is in England.  ONS suggest, and I agree with them, that this is because of differences between the UK countries in rates of vaccination in care homes.  The ONS infection survey takes data from a reasonably representative sample of people in the ‘community population’ – that is, excluding people who live in institutional settings, such as care homes (and some educational establishments, hospitals if the people are actually resident there, prisons, and so on).  Most people aged 80 and over do live in the community – about 90% of them according to ONS figures – but 10% of them do not, and many of that 10% live in care homes and wouldn’t be included in this survey.  In England, at the start of the vaccination programme, there were some issues in getting the vaccine to care homes (partly because of the need to store the Pfizer/BioNTech vaccine at very low temperatures).  These issues were solved quite quickly, but they might well have meant that a smaller proportion of people aged over 80 in care homes in England were vaccinated, in the early days of the programme, than happened in the other UK countries, and that would explain the difference in antibody prevalence in the over 80 group between the UK countries.  This difference should have disappeared by the time next month’s ONS data come out.”

Dr Peter English: “No conflicts of interest to declare.”